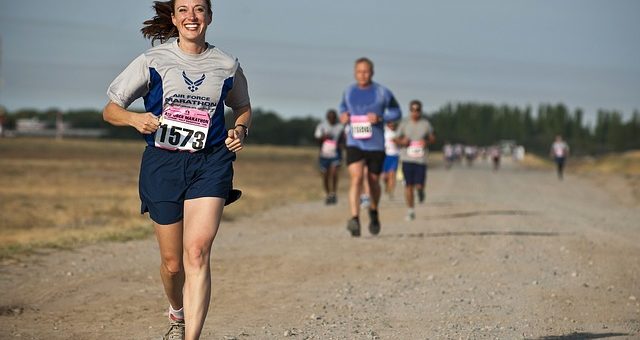 Are We Designed to Run?

Running is basically propulsion using the power of levers or, as they’re known in animals, limbs. Long bones are connected at a joint which is powered and made stable by muscles and tendons, with a flexible group of small bones where the limb touches the floor that can mold to a variety of surfaces. When our distant ancestors transitioned to two legged movement, the small bones of our front feet evolved into hands and huge muscles developed in our rears and thighs to power our legs and keep the body upright.

Before we had weapons, humans hunted their prey by outrunning them. Our stamina and ability to exude heat through sweating allowed us to pursue prey for miles until they were exhausted. The better we could run, the more we could eat, and the more we ate, the more likely we were to survive.

This adaptation happened over millions of years, and though our lifestyles and criteria for survival have changed dramatically over the past thousand – then even more dramatically in the past hundred – the fundamental structure of our bodies hasn’t changed.

So, to answer the question in the title: yes, every able bodied person is undeniably built for running!

We’re all designed to run, but not all the same way

We’re not all built for the same type of running, there is no one size fits all technique. Generally, flat footed people fare better for high power, short distance running, while people with more neutral or higher arches can be more successful in longer distances. Of course, with the right footwear and training, anyone can enjoy any type of running, but at athletic levels where every second counts, there is a clear divide between foot structure and running style.

Sprinting and long distance running also divide geographically, with the former dominated by athletes of West African and Caribbean descent and the latter made up primarily of athletes of East African descent, along with much more Caucasians than in sprint racing. Unsurprisingly, West African populations are more likely to be flat footed with longer forefoot bones, while more variety is found in longer distance running ranging from neutral-low arched East Africans and neutral-higher arched Caucasians. Depending on your foot structure, this will also dictate which injuries you’re at risk of as stress patterns will be invariably different.

This suggests that the type of running that our ancestors had adapted to strongly determines what style of running we will be best suited to today, though our lives may no longer depend on it.

In fact, running is now so unessential to our survival that most people rarely, if ever, run for any significant amount of time. Instead, the much maligned sedentary lifestyle has become dominant, with sitting the primary pose our bodies take whether we’re working, relaxing or commuting.

The consequences of taking a body designed for running and putting it in a chair all day aren’t pretty. Our hip flexors and hamstrings can shorten to the point that they become stiff and vulnerable to injury, while our calves, quadriceps and glutes weaken to the point that they can no longer generate enough power to run effectively or tolerate the stresses of repeated shock absorption and propulsion.

It’s not just our running ability that’s damaged: having weak and/or imbalanced structures in our legs and hips throws our pelvis and spine out of shape as well, affecting every structure attached to it. A healthy body really does start from the feet up: each structure needs to be strong and stable for the structures above that rely on them to be able to function properly. In extreme cases, tilting in the feet can cause imbalances that have knock on effects all the way up into the neck.

Hopefully, this blog has you itching to dust off your running shoes and get your body doing what it was made to do. But remember, the imbalances and weaknesses we develop from excessive sitting are unique to each person. Is it your hips or hamstrings that are the problem? Are your calves too weak, or are your glutes inhibited?

Running out the door without knowing your strengths, weaknesses and what you need to work on puts you at a higher risk of injury, so to make sure you get off on the right foot, call us on calling 020 7093 3499 or emailing enquiries@physiolondon.co.uk to book your detailed physical assessment now.

Back pain, knee and shoulder pain, are just a few of the common conditions we treat…